An incubator is a device simulating avian incubation by keeping eggs warm at a particular temperature range and in the correct humidity with a turning mechanism to hatch them.

The Egyptians had a method of incubation in 400 BC, using a cylindrical building or oven that had a fire at the bottom. The eggs that were incubating were placed on an inverted cone that was partially covered in ash. The eggs were placed in a woven basket that sat on top of the ashes. The building also had a roof that allowed smoke to escape, but it kept the rain out. 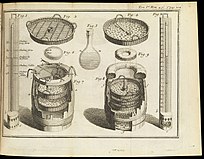 Controlled scientific incubation required the accurate and repeatable measurement of temperature, such as the alcohol-based thermometer proposed by the French naturalist and scientist René Antoine Ferchault de Réaumur in 1730, and the temperature scale named after him.

Réaumur used the thermometer in his design for an artificial incubator, presented to the Académie des sciences in 1747, and published in 1749 as l’Art de faire éclore et d’élever en toute saison des oiseaux domestiques de toutes espèces, soit par le moyen de la chaleur du fumier, soit par le moyen de celle du feu ordinaire, or “The art of hatching and rearing domestic birds of all species in all seasons, either by means of the heat of manure or by means of ordinary fire”.

Lyman Byce created a coal lamp incubator in 1879. The first commercial machine was made by Hearson in the year of 1881.

Ira M. Petersime of Gettysburg, Ohio, USA is credited with inventing the electric egg incubator in 1922. Shortly thereafter he and his son, Ray, began manufacturing the incubators. They were granted numerous patents on design features and subsequent improvements.

The innovation of the electrically powered incubator with expanded capacity (early on Petersime offered a model holding 15,000 eggs) encouraged the growth of large scale commercial hatcheries.

The incubator is an apparatus that is used to regulate environmental conditions such as temperature, humidity and turning for successful hatching of the fertile eggs placed in an enclosure. It is often used for growing bacterial cultures, hatching eggs artificially, or providing suitable conditions for a chemical or biological reaction.

The machine is recorded being used to hatch bird and reptile eggs. It lets the fetus inside the egg grow without the mother needing to be present to provide the warmth. Chicken eggs are recorded to hatch after about 21 days, but other species of birds can take a longer or shorter amount of time. Incubators are also used to raise birds.

An incubator should be able to set the perfect environment and condition for an egg to incubate because it regulates the factors such as temperature, humidity, and turning the eggs when necessary, so the egg is incubated properly because it plays the role of the hen in its natural state. The incubator also allows the egg to incubate while eliminating the external threats that could possibly harm the eggs.

The modern hatchery manager’s goal is to produce large numbers of uniform, robust, day-old chicks. Robustness is a health criterion, originating in the embryonic life stage of the chicken – and correlating directly with the performance and resistance of individual chicks under differing farm conditions. Incubating different species of birds at the same time is possible within the same incubator.

Modern incubators are electrically heated, controlled by a thermostat while some are powered by solar energy due to epileptic and erratic electricity supply. They can be used in a farmhouse, such as a large chicken-raising facilities, or they can be found in a common classroom for students to observe the egg inside and when it hatches. Some industrial incubators are large enough to hold up to 124,416 eggs, and some other styles can only hold a few eggs.

There are no reviews yet.

Be the first to review “Incubator” Cancel reply
Shipping & Delivery